When it comes to fat burners, pre workouts, and even some nootropics, it’s almost impossible to not find a formula that doesn’t contain caffeine. After all, caffeine is cheap, easily mass produced, and pretty much does a straightforward approach to improving focus, mood, and of course energy levels.

Despite the almost instantaneous benefits to performance and focus, caffeine is also known for its equally fast-acting side effects such as headaches, nausea, and the crash – when energy levels spiked by caffeine plunge below normal, causing you to suddenly feel tired or sleepy. Some users also experience high blood pressure and an elevated heart rate. These side effects are temporary, but that doesn’t make them any less of an inconvenience. [1, 2]

Caffeine enthusiasts have accepted that the side effects are the price they pay for what caffeine does for the human body. However, supplement researchers have come up with ingredient solutions and caffeine alternatives that provide users all the stimulatory benefits of caffeine without the accompanying side effects.

Two of the best caffeine alternatives today are Dynamine (Methylliberine) and Theacrine (Teacrine). They are described as functioning somewhat similar to caffeine, but reduces or outright leaves out the side effects associated with the stimulant.

What is Dynamine and Theacrine?

Dynamine and Theacrine are compounds isolated from the kucha tea leaf. These two caffeine alternatives were developed to provide performance and mental energy benefits similar to caffeine, but without the side effects. [3]

Dynamine is understood to provide a higher burst of energy, but at a shorter lifespan. Theacrine, meanwhile, gives a moderate yet more sustainable flow of energy. Either one is used often alongside caffeine to provide a “smoother” and sustainable energy boost that also mitigates or reduces stimulant-related side effects. [4]

How does Dynamine and Theacrine work differently from Caffeine?

Tolerance is when the initial dosage you took no longer gives you the same level of effects or impact, thus requiring you to take more. Tolerance is also why some users opt to cycle caffeine or pause their use to essentially “reset” their tolerance. What makes Dynamine and Theacrine great caffeine alternatives is how their repeated use does not lead to tolerance build up in the same manner as caffeine.

How does Dynamine and Theacrine manage to lower the tolerance build up? By acting on our adenosine receptors differently.

More than tolerance, the effects of Dynamine and Theacrine on our adenosine receptors also help prevent the crash.

Caffeine blocks adenosine receptors, allowing you to perform at your best without minding fatigue. The problem is once the caffeine runs out, all the blocked adenosine floods your brain, causing you to suddenly feel tired or sleepy. [5]

Dynamine and Theacrine only reduces adenosine receptor sensitivity which helps your brain cope as these caffeine alternatives go out of your system. This prevents the crash.

When is the best time to take Dynamine and Theacrine?

The best time to take Dynamine and Theacrine vary according to each user.

Dynamine provides a bigger spike in energy that lasts a shorter time compared to Theacrine. This makes Dynamine a better choice for those who work out in the afternoon or a little later. The energy Dynamine provides dissipates faster, preventing any form of sleep disruption or disturbance.

Theacrine provides a milder yet more sustainable and long-lasting energy boost compared to Dynamine. This makes Theacrine a great caffeine alternative for those who work out in the morning or want a perk-me-up, but doesn’t want to drink coffee or take caffeine pills. 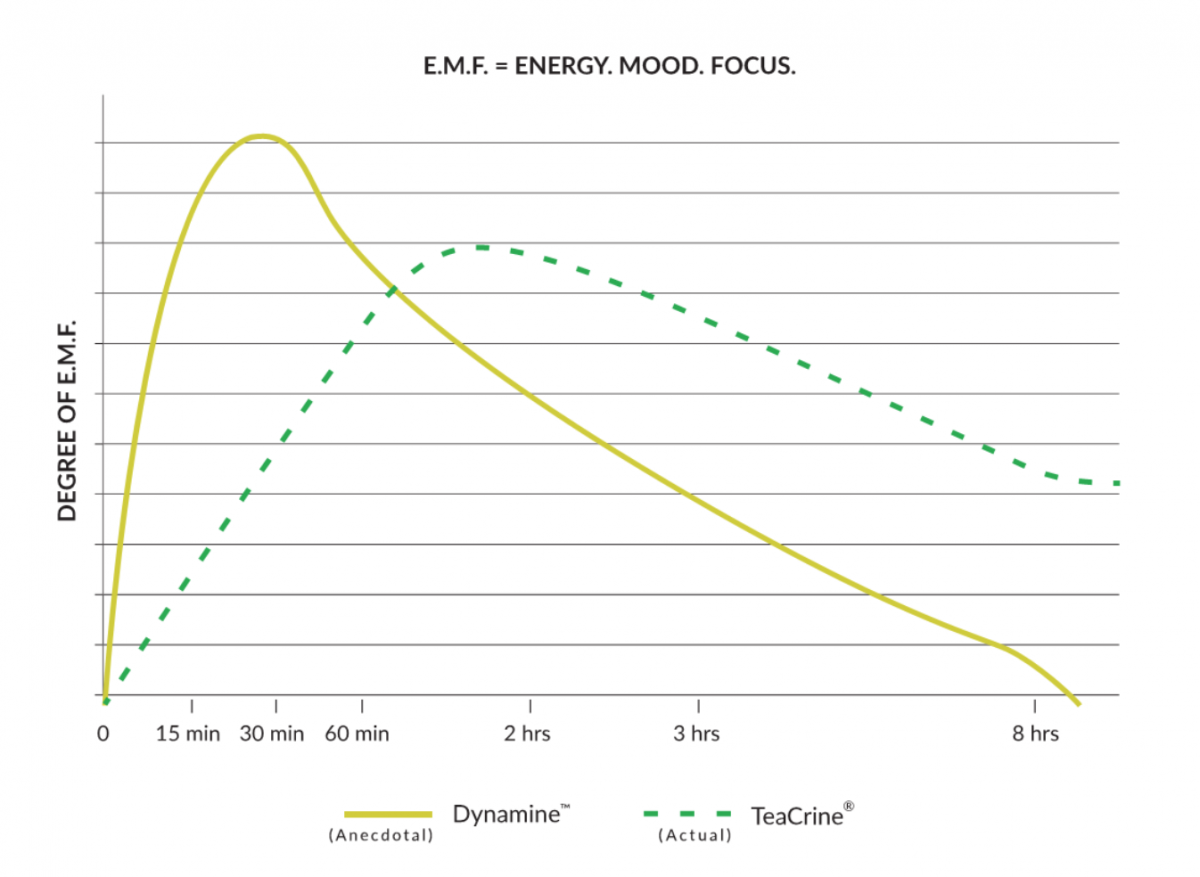 You can also use both caffeine alternatives in conjunction with caffeine. Studies suggest using Dynamine or Theacrine together with caffeine provides a good boost of energy, mood, and mental clarity with reduced sideeffects.