Ashwagandha KSM-66® – The most clinically studied Ashwagandha on the market

Ashwagandha has been called the king of herbs in Indian Ayurveda medicine. Many scientific studies have been carried out to determine its adaptogenic and anti-stress activities. Studies have also found it has been useful with strength performance, to improve glucose metabolism and increase testosterone levels.

The translation of Ashwagandha is roughly “the smell and strength of a horse” which alludes to it’s traditional use to support vitality and a healthy libido. Some say that once you grind the herb it smells like a horse with the thought to impart the power of one too.

Ashwagandha is one of the most important herbs used in Rasayana (a herbal or metallic preparation that promotes a youthful state of physical and mental health) and is commonly given to middle aged people and the elderly to increase longevity and well-being. Most commonly, Ashwagandha is mixed with water, ghee or honey to enhance the brain and nervous system to improve memory.

So what is Ashwaganda KSM-66?

KSM-66 Ashwagandha is the most clinically studied Ashwagandha on the market and has been evaluated in 22 ‘Gold Standard’ human clinical trials. Ashwaganda KSM-66 is a branded full-spectrum extract with the highest concentration of all the major root extracts on the market today. It uses the roots only with no addition of the leaves. The root is the part of the plant that is best used for adaptogenic benefits and internal ingestion. The leaves are more often used for topical treatments on the skin and not for internal consumption. The extraction process to get the extract from the root involves “Green Chemistry” principles without using alcohol or any other chemicals to do so.

The extraction process involves pre-treating the Ashwagandha roots with milk, so for this reason it contains milk constituents. This pre-treatment has been conducted for many years traditionally by Ayurvedic healers. The milk pre-treatment is important because it leads to retention of both hydrophilic components and lipophilic components of the raw root which then leads to the full-spectrum extract of such high potency. There is also a version of KSM for those following a milk free or vegan diet where the milk pre-treatment is skipped. 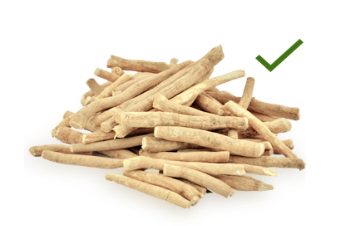 KSM-66 Ashwagandha has been clinically proven to:

Ashwagandha is a powerful adaptogen, it enhances the body’s resilience to stress and is typically used as an anxiolytic (a substance that abates anxiety).

A group of adults were given either the high-concentration full-spectrum Ashwagandha root extract or placebo. Their levels of stress were assessed before the trial and then 60 days after the trials. The treatment group had relatively lower serum cortisol levels compared to the placebo group. The findings of this study suggest that a high-concentration full-spectrum Ashwagandha root extract safely and effectively improves an individual’s resistance towards stress and thereby improves self-assessed quality of life. [2]

One study found that Ashwagandha may be effective in enhancing both immediate and general memory in people with MCI as well as improving executive function, attention and information processing speed. The study compared an Ashwagandha treatment group with a placebo group in both immediate and general memory, verbal paired associates, family pictures, logical memory and faces. At the end of the eight week study the treatment group demonstrated significant improvements compared to the placebo group.

The participants taking Ashwagandha had immediate and general memory subsets improved significantly, their spatial span was significantly improved, they had improved information processing speed, their sustained attention test showed significant improvement with no adverse effects and the subjective tolerability was excellent.[1] 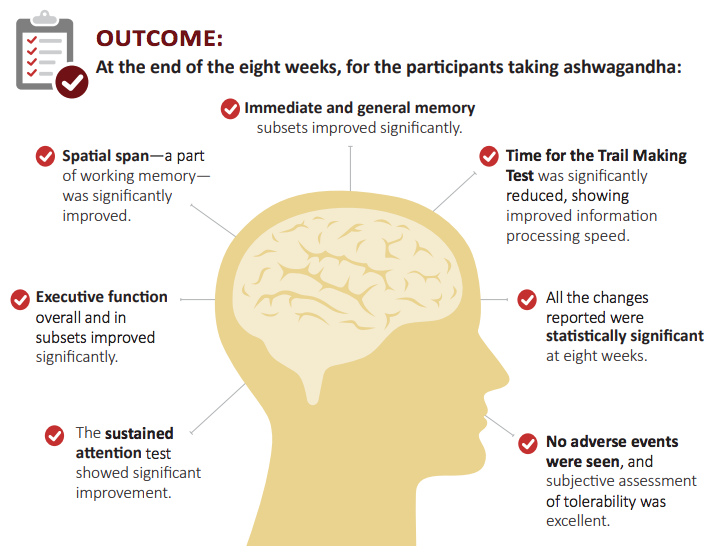 In an eight week study 57 men aged 18 to 50 years old with little experience in resistance training were randomised into treatment and placebo groups. The treatment group received 300mg of Ashwagandha root extract (KSM-66) twice daily and the placebo group received starch placebo. At the start of the study baseline measurements were taken and subjects underwent resistance training for eight weeks and were measured again at the end of the eight weeks.

Compared with the placebo groups the men who received the Ashwagandha had significantly greater increases in muscle strength based on bench press and leg extension exercise, muscle size at the arms and chest and higher testosterone levels. The treatment group also had decreases in exercise induced muscle damage and their body fat was down 3.5% compared to 1.5% of the placebo group. There were also no adverse effects reported by any of the participants. The study reported that Ashwagandha supplementation is associated with significant increases in muscle mass and strength and suggests that Ashwagandha supplementation may be useful in conjunction with a resistance training program. [1]

Ashwagandha is valued for its ability to increase vitality, energy and stamina. Researchers set out to see whether a high concentration root extract could improve the cardiorespiratory endurance and improve quality of life in healthy adults. The study was conducted over 12 weeks where a total of 50 healthy adults aged between 20 and 45 years with a normal body mass index received either 300mg twice daily of Ashwagandha or placebo. The study was evaluated by conducting a 20 minute Shuttle Run Test at baseline at week 8 and week 12, looking at oxygen consumption at peak physical exertion and quality of life assessed by a self-reported World Health Organisation QOL questionnaire.

The conclusion of the study found that the participants taking Ashwagandha had their oxygen consumption at peak physical exhaustion increased by 4.91% at 8 weeks and by 5.67% at 12 weeks. Their quality of life measures were positively affected with social relationships up by 9.46%. All changes were statistically significant compared to the placebo group. The study concluded that high-concentration full-spectrum Ashwagandha root extract improves an individual’s resistance toward stress and thereby improves self-assessed quality of life. [1]

Enhance sexual performance health in both men and women, and testosterone in men

Traditionally Ashwagandha has been used in Ayurvedic medicine as an aphrodisiac to help treat male dysfunction and infertility. Studies have found that Ashwagandha is able to increase testosterone in humans, however more research is needed on its ability to improve low sperm count. Researchers set out to see if a full-spectrum Ashwagandha supplement such as KSM-66 could positively impact low sperm count. 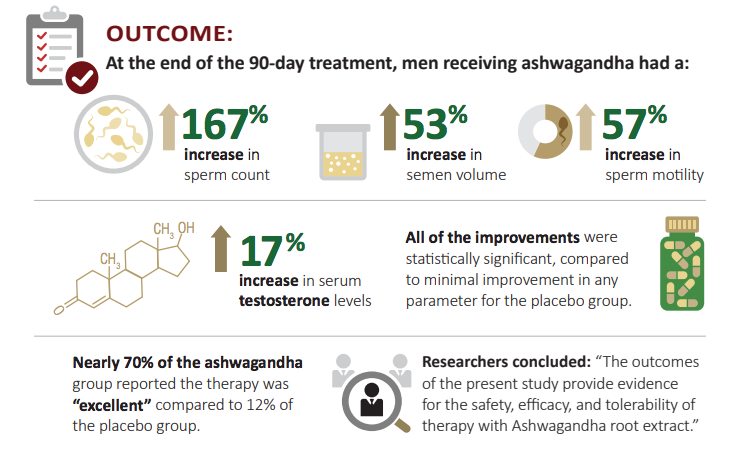 Ashwagandha has been used traditionally as an adaptogen to protect the body from stress and has been used to address sexual dysfunction in men and women. Researchers set out to find out if a high-concentration Ashwagandha root extract could reduce female dysfunction via anti-stress action or by offsetting androgen deficiency syndrome.

A study was conducted on 50 women aged 21-50 years age who were in a steady heterosexual relationship for over a year, but with diagnosis of female sexual dysfunction received either 300mg of Ashwagandha (KSM-66) or placebo for eight weeks. Their sexual function was assessed by using two psychometric scales, the female sexual function index questionnaire and the Female Sexual Distress scale, and by the total number of sexual encounters.

After eight weeks the women taking Ashwagandha had an increase in mean total Female Sexual Function, mean arousal and lubrication domains were significantly increased and they had significantly higher improvement in both orgasm and sexual satisfaction compared to the placebo group. The study concluded that oral administration of Ashwagandha may improve sexual function in healthy women.

Ashwagandha is one of the very few herbs in the world with a complex blend of phytochemicals which are able to operate at a systemic level on a wide range of actions on the human body.

Supplementing with Ashwagandha may be an easy and effective way to boost your health and vitality. It can reduce stress, anxiety, help fight depression, promote memory and cognitive function and assist with your gym goals.